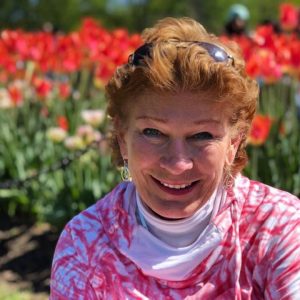 Kathleen began painting as a child under her parent’s encouragement and support. After attending college and spending a brief time in Europe studying art, she became an art teacher in private and public schools. She painted in oils for many years but discovered watercolors were her true passion. Her work is representational in style with a flare for looseness and reflects the beauty of New England. She has been a member of the Northern Vermont Artist Assoc., the Essex Art League, and is a Signature Member of the Vermont Watercolor Society. She has received numerous awards for her work. She has exhibited extensively throughout Vermont, New Hampshire and New York.  Kathleen says of her work, “I try to capture the viewer and draw them in.”  Whether it is the majestic green mountains of Vermont, or a child tossing stones into a sunlit stream, her work evokes a feeling of tranquility and nostalgia. Kathleen’s florals are exciting bursts of color jumping off the paper. This exciting use of color and design are a compelling part of her talent. Kathleen is a professional watercolorist and art instructor who uses only quality materials for her creations.

Kathleen’s work can be seen in many galleries throughout New England. She has sold a collection to the Trapp Family Lodge in Stowe as well as the State House in Montpelier, VT.

Most recently, she completed a collection of 42 original paintings of Stowe as it looked at the turn of the century for the Green Mountain Inn in Stowe, VT. Kathleen was the Featured Artist in the 2003-04 “Stowe Guide and Magazine” as well as the Cover Artist in the 2004-05 winter issue of the same magazine. She was also chosen as the Featured Artist in “Vermont Magazines- Arts and Culture Annual” in 2005. Her work has been chosen for the Brooks Calendar as well as the Fletcher Allen Calendar “A Celebration of Excellence.”  Kathleen’s painting “Venice Canal” received the prestigious Mary Bryan award for excellence in 2007.  In 2008 , Kathleen’s card, “The Sleigh” was chosen by Vermont’s Governor Jim Douglas as his Christmas Greeting and in 2009 he also chose her card “Camel’s Hump” for his Greeting card. Most recently Kathleen was chosen as one of 38 Vermont Artists for the ” Champlain’s Lake Rediscovered ” Touring Exhibition that opened at Shelburne Coach Barn in Shelburne Vermont and traveled to the National Art’s Club in New York City, then on to Boston and then back to Vermont finishing up at the State House in Montpelier. This past summer, Kathleen was chosen as the 2010 Featured Artist at the Champlain Valley Fair.

”Painting is my passion, my energy and my source of constant fascination.” Kathleen is also very happy to do paintings on commission. She has been teaching watercolor classes and workshops throughout the state for the past 14 years and is often called upon to be a guest speaker at art functions and to give inspiring demonstrations. Kathleen’s contagious enthusiasm and passion for her work is what sets her apart.